The Terrible Truth About Flouride

April 19, 2012Stephen A. LawrenceHealth and Wellness

If you missed part 1 of this article, read it here. In summary, despite the “official” position of dentists worldwide, the truth is fluoride is toxic, never has been proven safe and is not as effective as they lead you to believe.

So, where do we find this poison?

Most of the world has banned fluoridation or is trying to remove fluoride from their water supplies. Denmark, Sweden, Holland, and 90% of Europe are non-fluoridated. 43 million Chinese people suffer with severe dental fluorosis and 2.4 million with skeletal fluorosis, a severe crippling disease with bone deformities. Only in America and countries under strong American influence does the practice of adding this poison to the water supply exist. 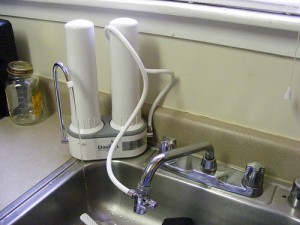 Some in-home filters (like the one pictured here) can be used to remove fluoride from your tap water.

California had remained 85% non-fluoridated, until recently, due to more than 70 rejections by voter initiatives. In October 1995 the California State Legislature ignored 50 years of voter’s rejections at the local-level and mandated the mass medication of California citizens with fluoride. AB733 passed with Governor Pete Wilson’s signature mandating that all water systems in California with 10,000+ connections fluoridate the public water supplies.

The legislature left it up to the health departments to find funding. A private health-care foundation has granted $10 million dollars to fluoridate water in California. Individual cities or water districts are applying for the money as Los Angeles did, which as of 1999 has a fluoridated public water supply.

Other sources include; Toothpastes typically use 1000-1500ppm fluoride, fluoride mouth rinses containing 500ppm fluoride, fluoride tablets, drops and vitamins. Many sources not usually thought to have high levels include, fruit juices, sodas, soups, milk, canned goods, beer, wine and fruit esp. raisins. Primarily these are due to the fluoridated water used to process the items, pesticide residue on the fruits and ingredients to stop fermentation.

What does fluoride do to you at these small levels?

1ppm fluoride increases production of deformed collagen throughout the body, most easily visible as white, mottled spots on your teeth. This level also affects other proteins and approximately 100 enzymes in the body by forming extremely strong H-bonds in proteins, enzymes and DNA.

As a result liver, oral and bone cancers rise, kidney disease increases, incidences of hip fracture increases and fluoride in the brain lowers the IQs in children and hinders learning behaviors.

Who is at the greatest risk?

Studies of susceptible groups in the populations include: those who drink 8-12+ cups of water/day (i.e. warm climates or athletes), elderly, those with poor nutrition esp. low Ca, Mg and Vitamin C Levels, patients with cardiovascular or kidney diseases.

Is there a way to avoid exposure to this poison?

If your water supply is fluoridated, you can try to filter it out with a distiller but the fluoride molecule, because it binds so strongly to most elements will probably over-whelm the filters after a few months. You can try to get a non-fluoridated source of water i.e. delivered spring water company and use only organic sources of foods to minimize exposure.

Many communities have rejected the fluoridation of their water supplies in California eg. Just recently: Santa Cruz, La Mesa, Escondido cities and the Helix, Riverview and Lakeside Water Districts.

Fluoride is classified both as a drug and as a poison.

As with most other drugs, ideally you want there to be a wide safety margin between the useful (therapeutic) dose of a medication and the harmful (toxic) dose. Fluoridation starting at 1ppm in our water is already at a level that has the potential to do damage to human systems and therefore does not have a wide margin of safety. This is the definition of a toxin and everyone would be advised to minimize over-exposure to this toxic addictive to our water supply.

To obtain a simple, house water test kit for fluoride call or write to my office. For information and prices call (760) 729-9050.