March 27, 2012Stephen A. LawrenceHealth and Wellness

For decades, dentists from all over the world have told you that fluoride is a safe, effective way of fighting cavities, but this is not the truth. The truth is fluoride is toxic, never has been proven safe and is not as effective as they lead you to believe. 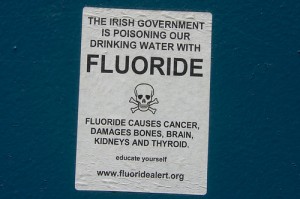 Fluorine, because of its small size and because it is one of the most electron-egative elements on earth, is extremely reactive. Fluoride is more toxic than lead and slightly less toxic than arsenic.

The National Federation of Federal Employees, local 2050, union of the EPA in Washington, D.C. states: “Our union member’s review of the literature over the past 11 years had lead us to conclude that a causal link exists between fluoride exposure and cancer, increased hip fracture, and damage to the central nervous system”.

In fact, fluoride has been linked to increases in fluorosis of teeth and bones, cancers, genetic damage, bone pathology, brain, artery, and kidney damage and lower IQs in children.

The U.S. Center for Disease Control and the British Ministry of Health admit that no laboratory experiment has ever shown that 1ppm fluoride in the drinking water is effective in reducing tooth decay. They also admit that there are no double-blind epidemiological studies on humans showing that fluoridation reduces tooth decay.

My position on Fluoride/Fluoridation is one of several opinions in this field, in which much research is still going on and needed. For example, “Over the years, and as recently as 1997, the (American Dental Association) ADA has continued to reaffirm its position of support for water fluoridation,” saying “fluoridation is the single most effective public health measure to protect tooth decay and to improve oral health over a lifetime.”

Here are the facts:

How Bacteria fight Fluoride in Toothpaste